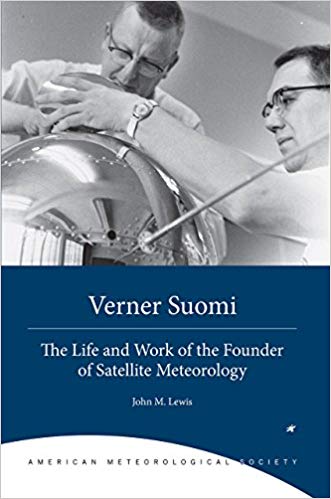 I was looking forward to doing this review. I love biographies and I’m working now with GOES-16/17 data which has been made possible by Verner Suomi’s early work in satellite meteorology.

The book’s first 146 pages are presented in 5 sections each with a subset of short easy to read chapters. Part I: The Winding road to Meteorology, Part II: Earth’s Heat Budget from Space, Part III: Space Science and Engineering Center: An Institute for Satellite Meteorology, Part IV: Notable Research Themes: Their Past, Present and Future and finally Part V: Suomi’s uniqueness. A final section offers insights about Suomi from those who worked closely with him.

Verner grew up in Eveleth Minnesota where their superb schools with a variety of hands-on workshops were great training for using your hands to get things done – an approach which stuck with Suomi afterwards. After completing Junior College and teacher’s college he worked for four years as a science teacher and earned a pilot’s license where ground school introduced him to meteorology.

Suomi heard a radio broadcast by C.G. Rossby, then at U. of Chicago, for a cadet program for college graduates interested in meteorology. Suomi was accepted and was fortunate to have great professors like Rossby and T. Bergeron. The course sparked Verner’s interest in the observation side of meteorology.

Suomi was good at designing and building instruments. His first remote sensing project was the redesign of a bulky mobile radiosonde system so that it could fit into a suitcase instead of a truck.

His second project was developing a sonic anemometer after hearing how acoustic measurements in the atmosphere could be used to measure wind velocity and his was apparently the first such instrument used in a field experiment to measure turbulence near the ground.

This led to an invitation to Iowa State Agricultural College (ISAC) to see if his device could derive estimates of turbulent heat and moisture fluxes over corn crop canopies.

His work was so timely it generated two job offers – one from ISAC and one from the University of Wisconsin (UW) – Madison. He chose UW – Madison.

At UW-Madison he started a fruitful collaboration with the brilliant electrical engineer Robert Parent which would lead to many scientific innovations. While Suomi had a constant stream of new ideas, Parent was able to successfully build the 20% or so of Suomi’s ideas that were excellent.

Suomi remained interested in agricultural meteorology. He began an experiment to calculate the heat budget over a crop field using an evaporimeter he designed using a water tank to measure latent heat flux. The mass of water that evaporated over time multiplied by the latent heat of vaporization of water gave the latent heat flux from the tank. Suomi then floated a container of soil with corn stalks on the surface of the water and poured oil on the surface surrounding this container so that evaporation would occur only from the container with soil and corn stalks. Evaporation of water from the soil and stalks reduced the weight of the inner container and Archimedes principle could be used to calculate the mass of evaporated water allowing to complete the calculation of latent heat flux for soil and stalks. Over several hours this method gave accurate measurements.

Suomi was encouraged to present the crop experiment as his PhD project and did so, passing his doctoral exam in front of an illustrious review panel. A key insight during the thesis defense came from a question from Herbert Riehl who asked Suomi – “Now that you’ve examined the heat budget over a corn field, how would you go about examining the heat budget for the Earth and it’s atmosphere?” This question was timely in light of the upcoming Earth Radiation Budget Experiments and IGY.

Riehl’s question was an epiphany for Suomi who realized that from space one could indeed measure the dominant radiative processes in the Earth Atmosphere system.

Though late in the planning calendar for the upcoming (1957-58) IGY, the heat budget experiment did get accepted with the support of key scientists. The challenge now for Suomi and Parent was to design the instrument that could operate from a rotating space-based platform.

It’s fascinating to read how Suomi and Parent had prototyped a new instrument and the had to convince Werner Von Braun to add their prototype “ping pong radiometer” as it was known on an upcoming satellite launch. Von Braun had just had two launch failures and he was not going to let Suomi and Parent’s instrument with its “rabbit ears” type antennas jeopardize a third launch. It was a last-minute idea Suomi had with an orange and a mirror in his hotel room that saved the day allowing them to instead use hemispheric radiometers on flat plates (bolometers). They got a green light from Von Braun. The rush was on to get the instrument built and figure out the telemetry required to download the data.

The above examples seem to summarize Suomi’s and Parent’s skills and approach which served them well throughout their careers. They were constantly working with new ideas and challenges, and were able to successfully solve, through hard work and creativity, scientific and technical challenges, get the job done on time, collect good data, present it and move on to the next challenge.

The book includes a brief description of how they went about designing the instrument that would allow them to calculate the Earth’s energy balance. Choice of materials and the Stefan Boltzmann law served as the basis for their six heat transfer equations with six unknowns that could then be solved. This and experiments to follow provided a steady stream of data for Earth Radiation Budget (ERB) studies providing insights over many years into the Earth’s planetary albedo, the important role of clouds, and how weather patterns influenced energy exchanges to space.

The rest as they say is history.

The book chronicles in an easy to follow manner the series of satellite experiments over many years that kept collecting ground breaking data. The low earth orbit of early experiments meant the satellite was moving relative to the earth and its weather patterns. Inspired by the use of replays in sports broadcasts, Suomi had the idea that if the satellite could stay still and have the weather move – they could see produce weather movies and see the weather move instead of the satellite. Suomi and Parent developed their spin-scan camera which used several scans of the earth to then generate full images of the earth that allowed weather patterns to be tracked and studied which then stimulated weather forecast research and innovation in many areas. Interest grew in using this data in data assimilation and NWP which was emerging at that time. From this data satellite derived winds were calculated (thanks in part to a very bright coder under Suomi) which were then available for data assimilation systems and NWP.

As ideas for experiments kept growing Suomi needed more and more resources. He lobbied for a formal multidisciplinary institute to specialise in satellite remote sensing. In 1968 the Space Science and Engineering Center (SSEC) came into existence.

The book’s information is supported by a great number of quotes from those who worked with Suomi. This help to get a broader picture of Suomi from many perspectives and how he greatly influenced so many people. His teaching style was very hands on with graduate students – over coffee they would discuss a research problem that students would pursue together over a term often resulting in publications. He had a knack for explaining complex science in simple terms. Even late in his career he still enjoyed teaching an introduction to Science class to non science students. Suomi excelled at designing and developing sensors that could withstand harsh environments like the sea or space. As a result, he helped train a slew of scientists and engineers.

The book does provide in great detail the many accomplishments in the wide range of fields Suomi contributed in. From his satellite work to measure poleward heat transport by the oceans, to boundary layer experiments on board ships, to his participation in planetary atmosphere explorations and many other areas.

Footnotes in the book offer links to interesting documents. One link I tested had a verbatim account of a press conference Suomi describing why his satellite heat budget experiment was relevant. There is also the Suomi website at U. Madison at http://library.ssec.wisc.edu/SuomiWebsite and its subdirectory /SuomiImages where more photographs and documents are available. The book has a comprehensive list of references to offer additional supporting information.

The book’s 189 pages offer an easy read for those working in meteorology, oceanography, data assimilation, NPW, agriculture and remote sensing in general. Reading about how others like Suomi confronted their technical and scientific challenges in creative ways was helpful. It’s also insightful to read how team leaders like Suomi were successful team leaders.

The book did not indicate if Suomi worked directly with Canadian Scientists. Those involved in early planning for Global Atmospheric Research Program (GARP) likely interacted with Suomi who lead this group. Page 70 has a group picture from the October 1971 meeting in Downsview of GARP’s Joint Organizing Committee (JOC) in which Warren Godson also appears.

With the latest GOES satellites now in space, the book is timely and provides a chance to read about Suomi and the role he and his teams played in developing satellite meteorology.