The title of this 2012 painting numbered 1260 in my artistic journey is “Three Degrees”. That title might sound cryptic. Let me explain.

All air traffic was grounded over North America for three or four days after the terror attacks of 9/11 on September 11th, 2001. A couple of curious meteorologists investigated the impact of grounding those aircraft. They discovered that the skies were much clearer and that temperatures responded correspondingly. The direct effect was that night time temperatures under clear skies dropped on average three (maybe four) degrees Fahrenheit below the averages established prior to 9/11. The infra-red radiation from the ground those nights was not intercepted by the jet contrails and returned to earth. Simply, the nights were clearer and cooler with no air traffic and no contrails. Here is the title of that research: “Impact of unusually clear weather on United States daily temperature range following 9/11/2001″ by Adam J. Kalkstein*, Robert C. Balling Jr of the Department of Geography, Arizona State University, Tempe, Arizona 85287-0104, USA.

There was a follow-up article that claimed that the investigators did not correctly include the effects of a warm-front in their calculations. That may or may not be the case but any reasonable observer cannot deny the impacts of pollution. Corporations that profit from the burning of fossil fuels spend millions (typically about $201 million every year) to delay or block policies to tackle climate change. The goal is to discredit research that studies the impacts of greenhouse gases and climate change. Confuse, complicate and contradict basic science that has been well known since the 1820’s. These despicable tactics are sadly effective and encourage inaction and ongoing profiteering. An informed and knowledgeable populace is the solution and the thrust of this effort.

Anthropogenic contrails are manmade cirrus clouds formed when water vapour from the exhaust of a jet engine condenses on particles which can come from either the surrounding atmosphere or the effluent itself. The aircraft soot from combustion is comprised of tiny particles which make for efficient condensation nuclei.

The water vapour freezes into ice crystals on these soot particles leaving a visible trail behind the aircraft. Any linear “veil clouds” that last more than 10 minutes behind the aircraft are called “persistent contrails”. These long lasting bands of ice crystals diffuse outward with time and have become better known as “contrail cirrus” being indistinguishable from naturally produced ice cloud. In fact the lines can spread into sheets composed of sub visible ice crystals that make the sky appear greyer. These blankets of ice crystals interfere with the escape of infra-red radiation from the earth surface. The distortion of the radiation balance generates a net warming at the surface.

Russian scientists have been experimenting with artificial clouds for decades. Indeed weather modification has been attempted since the first time rain fell on somebody’s parade. The seeding of individual clouds to encourage convective rain or to reduce the size of hail can have impact but the requirements in energy and material to do so are typically prohibitive. Meanwhile the climate engineering experiment of global warming has been underway since the industrial revolution first spewed fossil fuel exhaust into the atmosphere in 1760. The accumulated pollution over the years has changed the globe.

Relatively cheap, fast and generally safe air travel continues to increase by about 4 to 6 percent a year. Market factors can influence this but contrails are certainly increasing and I witness that fact in the skies that I paint. The International Civil Aviation Organization (ICAO) is a UN specialized agency established in 1944 to manage the administration and governance of the Convention on International Civil Aviation. The ICAO Annual Report of 2014 included the following graphic which shows air traffic increasing at about 6% a year.

There is a price to be paid for this particular high level atmospheric pollution. Unless we act, that expense will be felt by and paid for by future generations.

Contrails influence more than just the colour of the sky and the lives of sky gazers like astronomers, meteorologists and artists. Solar power generation and agriculture feel the impacts immediately. A typical contrail filled sky drops my solar generation by about 10 percent – which is en par with other solar power studies completed around the globe.

Agricultural research has measured the “one percent rule”. Crops and vegetation respond to a one percent increase or decrease of solar radiation with an equal impact on growth and productivity. A study in Holland has measured this relationship as being between 0.5 and 1.0 with most results skewed toward 1.0. Most flights are during the day when solar power is generated and plants rely on photosynthesis. Contrails quietly threaten a staggering impact on the green circular economy.

Peter Bosman, a friend in the Netherlands, has been studying the impacts of contrails and has prepared a documentary on the topic with a preview available here. Using EODIS NASA Data, Peter found that 50% of the days in the past four years had contrails while about 30-35 days per year had extreme contrail coverage.

As I watch and try to better understand the skies and the weather, I continue to be disappointed at how much cloud is actually man-made pollution. Jet contrails account for a large percentage of the ice crystals in the upper atmosphere. What should be blue skies with a ridge of high pressure are almost always tainted by jet contrails spreading out with the winds aloft. The blue skies become transformed into overcast thin cirrostratus.

This painting view looking westward from the eastern shore of Singleton Lake is a typical ridge of high pressure. I think that all of the cirrus clouds in this painting are the results of jets flying in and out of Pearson International and the other major airports of North America. There are three main contrails in this particular painting which also contributes to the title I picked. Several jets left their mark in the sky while I painted. I included just one of these contrails coming from Europe along the preferred great circle route. The higher contrail cast a shadow on the lower layer of cirrostratus.

So if I am ever given the “third degree” on why I painted “Three Degrees”, this will be my answer and I am sticking to it. It is a bit of science mixed with climate change and art. And it is all true. 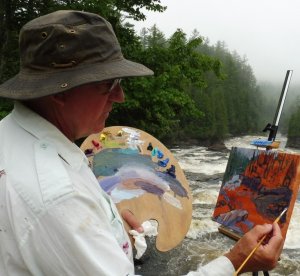 A man of many hats, Phil was born and raised along the St. Lawrence of Ontario, Canada and studied at Queen’s University as a nuclear physicist. A meteorologist for Environment Canada since 1976, Phil specializes in severe weather and training. Remote sensing is his forte – you might want to see a tornado before you die… but not just before you die!

He has farmed, raised bees, written weather and nature books and articles, lectured and instructed classes, seminars and presentations in art, meteorology and the science of Tom Thomson. An avid canoeist, birder and naturalist, Phil paints mostly ‘en plein air’ hoping his passion for life and the environment shines through the canvas.

He started painting in 1967 in oils and never stopped.