André Robert: One of the very first scientists to successfully perform a simulation of the atmosphere’s general circulation at the global scale using a computer model

Dr. André Robert (April 28, 1929 – November 18, 1993) was a Canadian meteorologist and research pioneer in modelling the Earth’s atmospheric circulation. After completing a B.Sc. in Mathematics from Laval University, André Robert started his career as a weather forecaster with the Meteorological Service of Canada (MSC) in 1952, and then shifted his attention to the development of atmospheric models for short and medium-range forecasts. For his PhD (awarded in 1965), André Robert worked at McGill University on the spectral model using spherical harmonics for the representation of atmospheric fields in global climate and Numerical Weather Prediction (NWP) models. Dr. Robert was among the very first scientists to successfully perform a simulation of the atmosphere’s general circulation using a computer model and became an internationally recognized leader and founding figure in NWP.

Contributions with the Meteorological Service of Canada 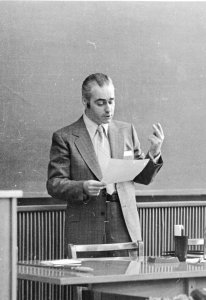 After transitioning from forecasting to research in 1959, André Robert made a monumental impact on early Canadian efforts in NWP. So much so, that he can be said to be one of the founders of operational NWP in Canada. André Robert designed and implemented the first two Canadian models, a barotropic grid point model in 1963, and a baroclinic grid point model in 1968. Largely due to his pivotal work on the spectral method in the 1960s, Canada was the first country to use a spectral model to produce operational forecasts.

In 1974, André Robert was the director of the Canadian Meteorological Centre (CMC) when it was relocated to its current location in Dorval, Québec. As the director, he primarily focused on the modernization of operational forecasting systems and, in particular, laid the foundations for the automation of forecasts. André Robert was one of many pioneers at the CMC (including Roger Daley, Amos Eddy, Michael Kwizak, Ian Rutherford, and Andrew Staniforth, among others) that advanced Environment and Climate Change Canada’s early NWP expertise. More details on CMC’s contribution to NWP can be found in Recherche en Prévision Numérique / Contributions to Numerical Weather Prediction by Hal Ritchie, et al., (2021).

Dr. Robert was known as an outstanding and pragmatic applied mathematician who constantly aimed at developing “efficient” algorithms that would give the best performance (accuracy, stability) for a given computation time. Beyond his personal scientific and mathematical achievements, Dr. Robert also led his research teams to the highest level of rigour and world-class quality. This resulted in a culture of excellence and innovation that continued long after his passing. Dr. Robert’s innovative methods for the efficient integration of atmospheric equations allowed MSC and therefore Canada to develop and operate world-class forecasting models using lesser computing resources than other countries. 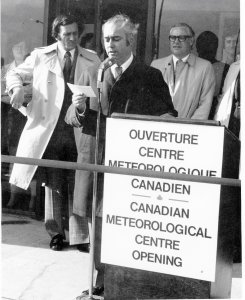 While working for the MSC between 1963 and 1970, Dr. Robert developed the semi-implicit time integration algorithm for efficient integration of the primitive equations for NWP and climate models. The development of this technique was significant as it decreased the time required to make a prediction by a factor of six without affecting the accuracy of the forecasts produced. Several weather centres in the world adopted this algorithm for their models, including Canada in 1974, Australia in 1976, European Centre for Medium-Range Weather Forecasts (ECMWF) in 1977, USA in 1980. Today, this method is used by many meteorological centres around the world. Dr. Robert also designed a novel semi-Lagrangian technique for an efficient treatment of transport terms. Combined with the semi-implicit scheme, this permits the time step in atmospheric models to be increased by a further factor of six without reducing the accuracy of the forecasts. Dr. Robert also made pioneering contributions to the treatment of the spatial derivatives using the spectral technique, helping Canada become the first country to use a spectral model to produce operational forecasts.

After retiring from Environment Canada in 1987, Dr. Robert took an academic position at the Université du Québec à Montréal (UQAM). In collaboration with colleagues, he demonstrated that the use of the combination of the semi-implicit and semi-Lagrangian schemes allowed an efficient integration of the fully elastic, non-hydrostatic equations (without major approximation to the physical equations). This paved the way to a more general atmospheric dynamical framework, applicable for a wide range of scales. The prototype model became known as the MC2 (mesoscale compressible community) model. Still today, the operational GEM model uses this efficient formulation, which allows its use for global (GDPS), regional (RDPS) and very high resolution, convection-permitting (HRDPS) weather forecasts. Put simply, MSC’s operational NWP systems are still using the efficient approaches developed by Dr. Robert for global, regional, and local weather forecasts.

Both in academia and in his professional life, Dr. Robert was an exceptional trainer and science communicator. He trained a large number of students and passed on to them his thoroughness, his ambitions for science, and his unique way of approaching challenges.

Dr. Robert had a strong influence on the international climate modelling community, producing global analyses in connection with World Meteorological Organization (WMO) research projects, long before Canada began making operational global forecasts. He was a founding member and one of the first chairs of the Working Group on Numerical Experimentation (WGNE), a very influential group of researchers established in the early 1970s that oversaw the development of modern-day climate science and meteorology. He was also an editor of publications on NWP for the WMO from 1972 to 1976. Between 1974-1975, Dr. Robert was the president of the Canadian Meteorological and Oceanographic Society. In 1974, he chaired the International Symposium on Spectral Methods in NWP in Copenhagen, Denmark. In 1975, he was a member of the Canadian delegation to the 7th WMO Congress. From 1980 to 1983, he was a member of the Natural Sciences and Engineering Research Council’s selection committee for fellowships in meteorology, astronomy and aeronomy.

In summary, Dr. Robert was not just a pioneer in Canada, but a global titan in using mathematical approaches to simulate the evolution of the atmosphere with computers. His influence and work continue to have profound effects today. NWP has revolutionized our ability to forecast weather and climate change. Weather models now allow us to forecast 5 days ahead with greater accuracy than 24-hour forecasts 50 years ago. Dr. Robert’s scientific innovations accelerated development within this field and laid the groundwork for much of the modern conception of weather prediction.

Dr. Robert was an inspiration to many in the field. His clear and compact explanations and presentations were memorable and impactful and he was frequently invited to lecture in the USA and Europe. He was invited to the National Center for Atmospheric Research in the USA, the United Kingdom Meteorological Office, the École normale supérieure in Paris, France, and the WMO in Geneva, Switzerland.

Dr. Robert received these awards and recognitions over the course of his life:

Dr. Robert’s legacy is not limited to the history of the CMC; his vision, creativity and innovative approaches live on and continue to inspire MSC as an organization today. Looking further, Dr. Robert is one of the “heroes of the 1970s” whose intellectual capital still informs major elements of the numerical treatments employed in current operational forecasting systems around the world today.

Christopher Smith is an analyst for the Meteorological Service of Canada. He wrote this profile with support from many current and former Environment and Climate Change Canada employees, the Canadian Meteorological and Oceanographic Society (CMOS), as well as former students, former colleagues, and the family of André Robert.