A scientific rover named Curiosity has been trundling around on Mars for the past 5 years, taking images of the atmosphere to look at cloud and dust. Because of data constraints, our group at York University get about 12 minutes of time every week or so. Imagine trying to understand the weather by looking at only one section of the sky once a week through a toilet paper tube! Despite these limitations, between our work and that of other scientists and spacecraft, we have been able to put together a robust picture of what the martian environment is like.

Near the surface, the martian atmosphere is a dry, cold and low-pressure place beset by UV irradiation, not unlike the upper terrestrial stratosphere. Near the equator, daytime surface temperatures may rise as high as -10ºC during the summer, with the surface rocks getting as hot as +30ºC. However, the nights are punishing. Though the atmosphere is nearly pure CO2, with an average of only 610 Pa of pressure, infrared cooling means that the temperature can fall nearly 100ºC. If not for our RTG, the rover would be challenged to survive these nights. However, luckily the weather is relatively light. With such low pressures, it is difficult to generate sufficient gradients to drive strong winds and most weather is local (see the excellent piece by Peter Taylor et al. in the April 2009 edition of The Bulletin). Yet there are seasonal changes. At -123ºC, the atmosphere itself begins to freeze out, driving a 30% change in the atmospheric pressure over the martian year and depositing a meter of CO2 on the winter cap down to ~60ºN. We also see moving sands driven by the occasional winds and fossilized dunes and ripples from when the martian atmosphere was much thicker and warmer (Lapotre, Science, 2017).

The surface of Mars is very dry and desert-like, meaning that it is home to vast quantities of dust which can get whipped up into the atmosphere from the surface and can reach very high altitudes. Because the atmosphere is so thin on Mars, only limited Rayleigh scattering occurs (scattering of light by atmospheric molecules that causes the sky to be blue during the day and the sunsets to be red in our own atmosphere). With no light scattering at all, the sky would appear black. However, the martian atmosphere’s abundant dust particles scatter the light, giving it a pinkish hue during the day and spectacular blue sunsets.

Dust is so important to the martian environment that the seasons can be defined in terms of a dusty and a clear season. That’s not to say there is no dust present in the atmosphere during the clear seasons, there’s just less of it! The dusty season happens during the southern hemisphere’s spring and summer – sometimes during very dusty times, Curiosity is unable to see the edge of the crater it’s in. Dust devils are frequently seen by Opportunity and Curiosity, especially during the dusty seasons, and sometimes we see several dust devils at once!

Of course a dry and desert-like environment isn’t complete without a dust storm or two. Local dust storms can happen at any time in the martian year, and are restricted to a (relatively) small area. Global dust storms, the likes of which we don’t see on Earth, only happen during the martian dusty season and happen on average every 2-3 martian years. The effect on the whole planet is visible from orbit: the surface gets completely obscured by dust lifted from the surface and gradually clears over several months as the dust is dropped back onto the surface.

We can also look at dust on a more local scale. With Curiosity we can look at the amount of dust in different regions of Gale Crater, which can tell us about atmospheric circulation occurring in and around the crater.

If you like dust – Mars is the place to be!

When people think of the atmosphere of Mars, they might not realize that clouds actually flow over Gale Crater. They resemble cirrus clouds here on Earth and are so thin that if you were to stand in Curiosity’s shoes (or wheels!), you’d most likely not see them. This is due to the extremely thin atmosphere on Mars where the average optical depth is 0.02 (Kloos et. al, 2016) . To put this in perspective, the human eye can see optical depths greater than 0.04. Therefore, the majority of the clouds that we do get to witness at Gale Crater would be invisible to any human explorers. Unlike here on Earth, Mars’ atmosphere cannot retain enough water-ice particles to have significant cloud cover, especially over an equatorial region like Gale Crater. In fact, if you were to condense out the entire atmospheric column of water vapour onto the surface, you would get a layer less than 0.1 mm thick, even on the wettest and cloudiest day!

Just like on Earth, Mars has seasons – even has a recurring one for clouds. This cloudy season is known as the Aphelion Cloud Belt and shows significantly more clouds in our atmospheric movies than any other time of the year. In fact, the dustiest and cloudiest seasons happen to be at opposite times of the Martian year. During the cloudy season, Mars is approaching aphelion which cools down the atmosphere allowing any water-ice particles to condensate onto dust grains.

To see these martian clouds, we take two types of observations with Curiosity that consists of 8 images sewn together to create an atmospheric movie. They are known as Supra-horizon movies (SHM) and Zenith movies (ZM). The main difference between them is the angle of the camera that the images are taken at. SHMs are taken just above the crater rim and ZMs show the atmosphere directly above the rover. One question that is always asked: how do you know those are clouds? Well, we look for a general shape within our atmospheric movies. If the features tend to stay together and move across the frame simultaneously, they would be representative of clouds, like how clouds here on Earth behave. Dust has also been seen in our movies and tends to have chaotic movements, making it identifiable as dust rather than clouds. A great example of what clouds on Mars actually looks like is shown in the following atmospheric movies.

Is Mars a habitable place?

Over the years, many have speculated on whether Mars’ environment could be engineered to be more Earth-like. This presents a geo-engineering challenge for which there is no parallel. Fundamentally, Mars has three problems. First, there’s not enough energy to go around. No matter how high you boost the CO2 pressure, it isn’t possible to generate enough of a greenhouse effect to get the average surface temperature above freezing. Our work with exoplanets has shown us that pure hydrogen could do the job and we may yet find a more reasonable gas cocktail to do the trick, but that just highlights the second problem: Mars is extremely poor in volatile gasses. Beyond the CO2, there’s just a hint of Nitrogen and Argon and almost no water – Mars’s high D/H ratio of 5.5 x VSMOW is a testament to its lost ocean. Perhaps you could generate oxygen, baking it out of the dust and rock on an industrial scale, but you’d have to import the needed buffer gasses and water in bulk from comets. Even if you do succeed in creating a habitable atmosphere on Mars, you would encounter the third problem: it would be ephemeral. Low gravity equates to high atmospheric escape rates. Your atmosphere wouldn’t be the first that Mars has let slip through its fingers.

In the end we’re forced to conclude that we would be much better off trying to solve our own problems on Earth rather than moving on to the next world. You may ask – why then go to Mars? Some will cite exploration or to inspire our children to take up science. But there are also benefits for an atmospheric scientist. By examining such extreme conditions, we get a window on how our theories hold up when taken far past their validation points. Several of our presenters at the Congress were doing just that – using an atmospheric model developed by Environment Canada to predict Canadian weather to examine the weather on Mars. Ultimately, by finding explanations that work under both martian and terrestrial conditions, we gain a clearer window into the fundamental science that animates both atmospheres.

About the Author: John Moores 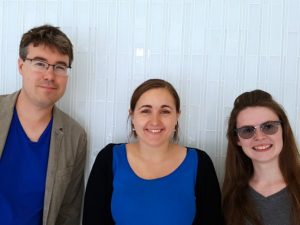 John is an Assistant Professor in the Department of Earth and Space Science and Engineering at York University. He has served on the CMOS Scientific Committee since 2014 and represents the society on the Canadian Space Agency’s Planetary Exploration Consultation Committee. John is pictured here with team members Christina Smith (centre) and Charissa Campbell.