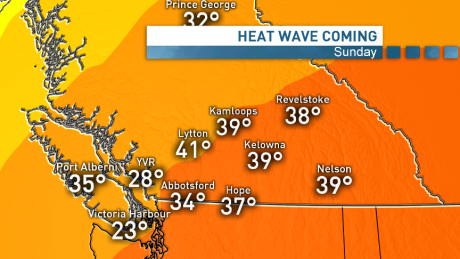 The World Health Organization (WHO) estimates that 12.6 million people die every year from diseases and injuries due to unhealthy environments associated with air, water and soil pollution, chemical exposures, ultraviolet radiation and climate change.1 Climate change and variability are affecting health and well-being of people around the globe and risks are increasing. Risks to health can be direct (e.g., health impacts from heat waves) or indirect and arise from ecosystem-mediated pathways (e.g., vector-borne infectious diseases) or from the influence of societal institutions and actors (e.g., impacts on occupational health).2 In Canada, among other effects of weather and climate, the health of Canadians is being impacted by extreme heat events. In 2009, for example, a heat wave struck Vancouver and Fraser, British Columbia resulting in 134 deaths.3 Populations in Canada of greatest concern in planning for the health impacts of climate change include children and infants, some older adults, people with chronic diseases, the socially and economically disadvantaged, Indigenous Populations and those with compromised immune systems.4

A growing concern within and outside of Canada5 are the impacts of climate change on mental health. Such impacts have the potential to incur significant costs to the health system and disrupt the lives of many Canadians over the long-term as impacts can last for years. In a study of the impacts of heat on human health in nine low-socioeconomic neighbourhoods in Quebec, authors found a 44% prevalence of physical health impacts and a 17.8% prevalence of mental health impacts.6 In addition, the mental health outcomes associated with the devastating 2016 wildfire in Fort McMurray, Alberta include post-traumatic stress disorder, depression (PTSD), and insomnia among many people affected by the fire.7

Other climate risks such as drought can pose major socioeconomic challenges, particularly amongst land-labourers, which can affect economic and food security and ultimately impact psychosocial wellbeing.8 Drought often occurs gradually, building up over time, and is harder to observe; mental health effects of living through this type of disaster are more subtle and last longer than with other natural disasters. Emergency and disaster management planning, resources deployment, and support activities to respond to the impacts of weather extremes are generally more typically engaged for short term events, with a more defined beginning and end.

Public health officials have had longstanding collaboration with meteorologists and climatologists in efforts to reduce risks to health from a range of weather and natural hazards such as extreme heat events, violent storms, floods, droughts, and air pollution episodes. 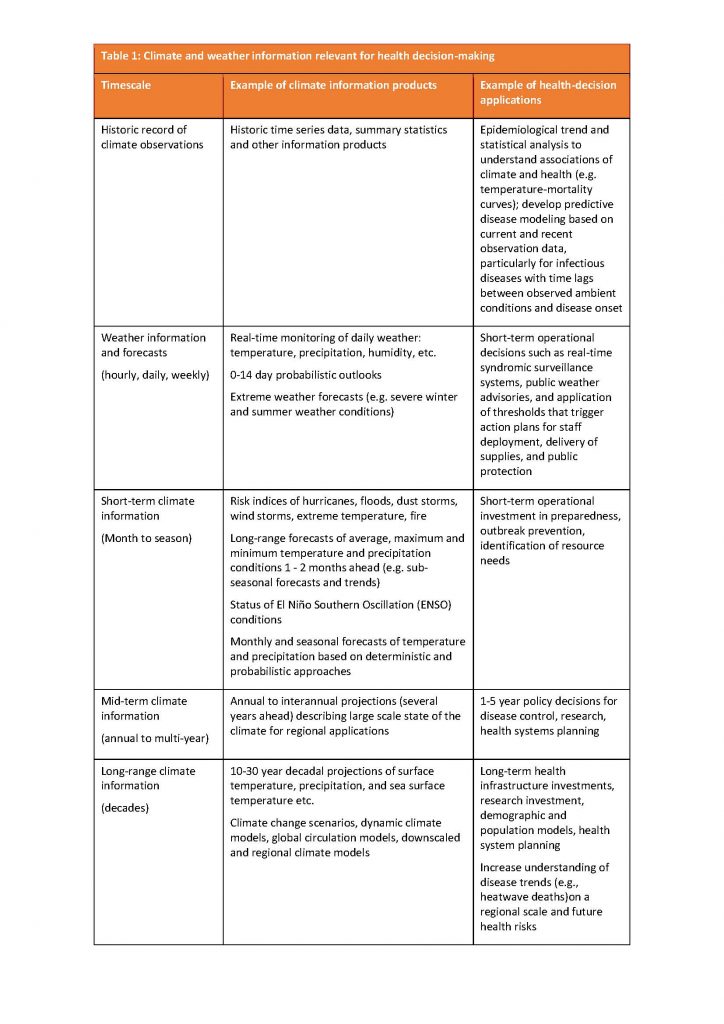 The World Meteorological Organization through its Global Framework for Climate Services is facilitating new partnerships and alliances among these officials to aid in the development of weather and climate services, such as severe weather forecasts, hazard maps, heat-health warnings and long-term climate projections that are tailored to the needs of the health sector.9 Table 1 presents climate and weather information relevant for public health decision making in the context of a changing climate.

In Canada, weather and climate information is currently employed at all temporal scales to protect people – from the use of real-time data for public alerts of hazardous weather to projections of climate change impacts on health at the end of the century. For example, in Canada over 50 public health authorities at local and regional levels use short-term temperature forecasts from Environment and Climate Change Canada to issue heat warnings to the public and community organizations to reduce heat illness and deaths.10

In response to the increased risk of wildland fires as a result of climate change, Manitoba Health, Seniors and Active Living, with assistance from Environment and Climate Change Canada, developed a smoke monitoring system that uses a suite of tools, including a GIS-based smoke “common operating picture,” to provide emergency managers and public health officials with real-time and forecasted information on wildland fire smoke conditions in Manitoba communities. Emergency managers and public health officials use this information to communicate action-based health messages to communities and populations at risk, so that interventions can be taken to protect health.11

Given that climate change is a recognized driver of the northward expansion of some infectious diseases into Canada12, application of climatological data has significant utility in helping prepare for impacts on health. For example, long range projections of the expansion of the vector that causes Lyme disease, which are based upon climate modeling, have been used by public health authorities in Canada to raise awareness of climate change impacts on health and plan for emerging health risks.13

Opportunities for Increasing the Resilience of Canadians to Climate Extremes

Increasing impacts from climate change and growing risks to health will require an integrated approach that brings together health and emergency decision makers, meteorologists and climatologists to address emerging climate hazards threatening Canadians, especially considering the complexity of certain risks (e.g., impacts on mental health, impacts from cascading or cumulative events) as well as the recognised complexity of risk communication. For example, with respect to mental health, some studies have shown that early warning communications about extreme weather may actually trigger mental health problems like anxiety or feelings of impending doom, particularly for people with pre-existing mental health conditions.14 Other studies demonstrated the protective nature of early warning communication for mental health and wellbeing. Munro et al. (2017) found that people who received a 12-hour minimum notice of flooding were less likely to report anxiety, depression, or PTSD than those with little to no advanced warning.15 Key questions to consider to enhance transdisciplinary collaboration between meteorologists, climatologists, and public health officials in this regard are:

New and innovative measures requiring the expertise of climatologists and meteorologists are needed to address key challenges facing Canadians from climate change. Such challenges include, for example:

Meteorologists and climatologists are well positioned to supply valuable information and services to address these three challenges and increase awareness of the health risks posed by climate change; they are a trusted voice in their scientific field and they have the medium (TV and radio) through which they can share information broadly and frequently. According to a recent study by Zhou et al. (2016), meteorologists and climatologists are essential agents of knowledge transfer because they are recognized by the public as a reliable source of information, thus they can play a key role in supporting climate change education.16 These authors suggest that meteorological broadcasters have significant reach and knowledge about local climate and weather patterns; therefore, they are well-positioned to communicate to broad audiences with information that can be tailored at the local level.

Recent investments under the Pan Canadian Framework for Climate Change and Clean Growth have resulted in the funding of the Canadian Centre for Climate Services (CCCS). The CCCS has responsibility to provide national leadership coordination and nurture regional capacity. It will assemble national foundational climate products (databases, etc.) and climate information and tools to support adaptation decision-making. These value-added climate information products will support understanding and preparation for the health impacts of climate change on Canadians. It is through transdisciplinary collaboration – such as between climatologists and meteorologists, and health and emergency management professionals that new risk analyses and practices to address climate related risks may well emerge.

Katie Hayes is a PhD candidate at the Dalla Lana School of Public Health and a Research Affiliate at Health Canada’s Climate Change and Innovation Bureau. Her research focuses on climate change and mental health risks, impacts, and responses

Peter Berry is a Senior Policy Analyst and Science Advisor to the Director at Health Canada’s Climate Change and Innovation Bureau. He is also Adjunct Assistant Professor at the Interdisciplinary Centre on Climate Change at the University of Waterloo. His research focuses on climate change impacts on health, adaptation, and health systems resiliency.